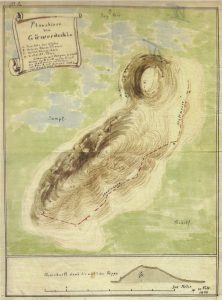 In the late nineteenth century during the German excavations at the iron age settlement of Sam’al (modern Zincirli in Southeast Anatolia), there was an exploration of Gerçin Höyük, lying 7 km to the north of that excavation site. The two striking peaks of this free-standing rocky hill dominate the surrounding valley of the Karasu, and so are clearly visible even from a distance. Gerçin Höyük lies around 80 km west of the modern city of Gaziantep and not far from the county town Islahiy.

When Felix von Luschan inspected the site in 1890, fragments of four statues and the complete colossal statue of the weather god Hadad were found. The statue bore on its lower body an inscription in the Semitic dialect of Sam‘al, according to which it was set up by the king of the city of Sam’al, Panamuwa (840-810 BC), at the place where he built, as well as the temple for the gods of Sam’al, also a royal necropolis. Gerçin would thus be the seat of a “cultic” complex, possibly with multiple functions: as dynastic burial site, ancestor cult complex, and temple complex for the weather god Hadad and other gods of Sam’al (Bonatz 2000; Niehr 1994; 2006). Although already in 1890 Robert Koldewey had observed the existence of two fortress walls, the existence of a settlement has so far not been confirmed.

At the local level Gerçin Höyük offers a key to understanding the origin and development of the Luwian-Aramaic kingdom and city-state of Sam’al (Bît Gabbar). The question of when exactly the city-complex of Sam’al was founded remains unanswered. The general assumption is of an Aramaic new foundation which, according to textual and iconographical evidence, occurred around the tenth century BC (Wartke 2005). The new excavations of the Oriental Institute at Zincirli that have been undertaken since 2005 are examining this question intensively (Schloen and Fink 2009), but they have so far not provided any unambiguous results. The new excavation results probably indicate, in the deep sections on the citadel, bronze age predecessor settlements, but it has not been possible to demonstrate a continuous sequence in the transition from bronze to iron age. It has also not been possible to clarify when the building activities began that led to the appearance of the iron age city complex, nor whether the latter is indeed to be equated with the arrival of the Aramaeans in this area, despite re-excavation of the buildings of the upper and lower city uncovered previously by German archaeologists (Pucci 2015). New explorations on Gerçin Höyük hence open up a series of options that would yield information of consequence also for interpreting the city of Sam’al’s history: The complex could be a) older than the foundation of the city at Sam’al, and could so have been a (religious) point of attraction that led to the selection of this location; b) it could have been set up in parallel to the foundation of Sam’al, as an exceptional monument of the new ruling dynasty to create an identity and mark the space; or c) it could have been added to the city-state only later, as an especially ambitious project by a single ruler, namely Panamuwa in the late ninth century BC.

Despite its clear regional and transregional importance for research, Gerçin Höyük has not been investigated archaeologically since the “visits” of the nineteenth century. Existing knowledge of the building complexes on Gerçin is therefore extremely small: since the publication of the Hadad statue, its inscription, and the sketch of the other four statues (von Luschan 1893), and since the brief description of the topography of the settlement by Koldewey (the sketch was published in Wartke 2005), scholars have on the one hand analyzed the inscription and the language (Sachau 1893; Tropper 1993; Niehr 1994; 2001), and on the other hand discussed the whole monument in its significance for cultural history, from iconographical and iconological perspectives (Voos 1988; Bonatz 2000; 2014).

The connection between the Hadad statue and the other four statue fragments in the context of rituals in cult for the dead was once again highlighted briefly in two articles by Herbert Niehr (2001; 2006). However, the uncertain archaeological context of these statues and the lack of archaeological excavations at this site prevent reconstruction of the specific burial complexes and so also of the ritual actions connected to them.

Research into the cult of ancestors in the early iron age of the North Syrian – South Anatolian area has shown that it should be seen as an important instrument of identity among both the Aramaic and Luwian dynasties and their urban elites (Niehr 1994; Bonatz 2000, Brown 2008; Gilibert 2011). The ritual practice of ancestor cult and cult of the dead is principally known from the iconographical analysis of grave stelae, relief-carved orthostats, and the upright statues on the citadels, and from some inscriptions. Despite the spectacular new find of the Katumawa Stele in the lower city of Zincirli, which for the first time documents the erection of a stele to commemorate the dead in its original architectural context, which is interpreted as a “mortuary chapel” (Strubel and Herrmann 2009), we today still largely do not know what the relationships between ancestor cult and the burial places were, where the necropoleis of the settlements lay, or what influence was exerted on the conception of monumental cult complexes by the demonstrable close relation between ancestor cult and cult of the gods. Accordingly, the complex on Gerçin Höyük presents the unique opportunity to address specifically, in an archaeological treatment from regional and transregional perspectives, questions of the origin and development of a prominent religious site at which cult of gods, ancestors, and burials are united. The project advances firmly from the hypothesis that in Gerçin lay a – and probably even the – principal temple of Sam’al, and that the complex of royal graves at this place is a result of its sacral significance.

From 2011-2016 Prof. Dominik Bonatz and Prof. Marina Pucci were able to document the illicit excavations, which advance further each year, on Gerçin Höyük. The architectural structures and the destruction horizons that are visible in the vertical profiles of the illicit excavations, and the potsherds that were left behind in the earthmounds and in the cuttings, show that the site was settled already in the Early Bronze Age and probably during the Late Bronze Age, that it had its greatest extent in the iron age, and finally was also still used in the Hellenistic period. Accordingly the iron age temple that is hypothesized at this spot could have drawn on a longer tradition. Further, the fragment of a monumental sphinx sculpture that was found in 2011 in one of the illicit excavation cuttings shows that not only is there a close link to the near-identical sphinx bases from Zincirli, but also that at this spot a prestige building very close to the late architecture of Sam’al may be expected. 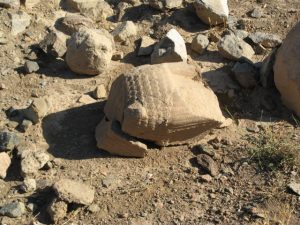