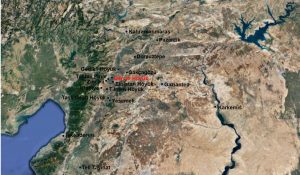 Gerçin Höyük lies at the northern edge of the plain of the Karasu, 7 km north of Zincirli and 20 km north of Islahiye, the principal town of the administrative district of Islahiye-İlçesi in the Turkish province of Gaziantep. The plain is only 10 to 20 km wide and is bounded to the west by the steeply rising slopes of the Amanus and to the east by the lower mountain chain of the Kurd Dağ.

Gerçin Höyük is not an artificially raised settlement hill but a natural rock formation with a striking, nearly circular peak in the north and a long, oval peak in the south. The northern peak at its summit stands over 70 m above the plain, the southern peak 60 m above it; the two rises are divided by a saddle that is only 20 m above the plain. The total length of this pair of hills runs to 1060 m; at its widest point the south hill measures 440 m. 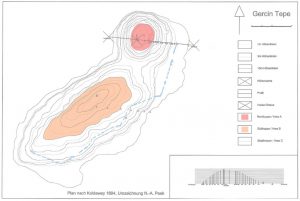 The slopes that lead up to the peaks are very steep; only on the east of the south hill and in the saddle is there a less pronounced gradient. The natural rock reaches right through to the top of both peaks. Nonetheless it can be clearly seen that on the south peak from ca. 40 m above the plain artificial deposits begin, and that the completely leveled plateau on the north peak is likewise the result of anthropogenic interventions.

The great depth of the cultural layers that lie here is attested by the numerous trenches and shafts from illicit excavations, which have in recent years increased at this site to a troubling degree. It can be seen clearly that the illicit excavations on both the north and south peaks extend as much as three meters deep into the terrain, partly in larger trenches, partly in smaller pits, in one of which an attempt has even been made to drive a deep tunnel into the rock. The earth spoils cleared aside from the illicit excavations exhibit large quantities of rubble-wall materials mixed with refuse remains (ceramics and animal bones). Below the surface, in addition, rows of orthostats can be seen and in the vertical profile of the pit walls mudbrick-wall materials and collapsed mudbrick walls can be seen. Not to be confused with these unambiguous traces of ancient building are the modern supporting walls that have been erected against the wall and edge of the pit, attesting to the efforts invested in the illicit excavation activities pursued here. 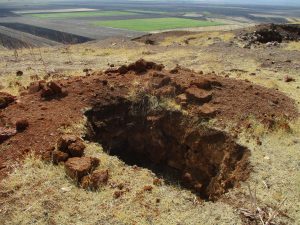 On the south peak a longer shaft leads into a tunnel, by which an attempt has been made to search for chambers in the interior of the hill. Leaving aside this critical situation, which can hopefully be halted by formal excavations, the illicit excavations convey a very clear picture of the existence and the in part good preservation of the architectural layers that begin directly beneath the surface.

Bearing in mind the present topographical situation on both peaks, and drawing also on the insights derived from the illicit excavations, we can delimit with some assurance two potential settlement zones, which are thus also potential areas for archaeological work: zone A on the flat north peak with an approximate total area of 2.2 ha, and zone B on the south peak, which slopes gently out in all directions, with an approximate area of 8.8 ha. In addition there is a third zone along the roughly 965-m-long ancient wall at the foot of the eastern slope, which was documented by Koldewey in 1894 and of which a few traces can still be seen today on the surface. 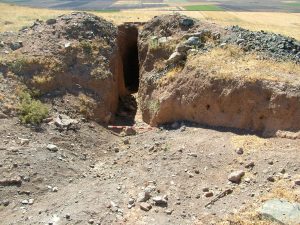